I was waiting for 1140 to short but the markets didnt wait for me to return from vacation and sold off from 1131 till 1006 intraday low(till the point where 80 week Moving average sits).

Then we saw an amazing rally up to 1096 in just more than a week time accompanied by a Euro rally.

We have seen bad economic figures , but the first earning reports beat the analyst estimates, so on that side they seem to cancel each other.

Overall in terms of market sentiment, i believe the market is saying to us, "Ok , the European crisis is under control and not as serious as we thought, so where did we stop with the massive liquidity(thanks to the monetary policies) on our hand, lets buy stocks again!!!"

As long as there is no bad news, the bulls seem to have it under control despite the low volume on the up days.

The chart below is the daily S&p , you can see the market is testing 50 day MA, and we have seen the death cross(50 day crossing 200 day MA to the downside) finally. I already shorted the markets on average around 1080.In case 50 days give way I will sell more around 1110 where 200 day MA sits. And if it gives way the last resort for the bears is the 1131, where the previous sell off began. 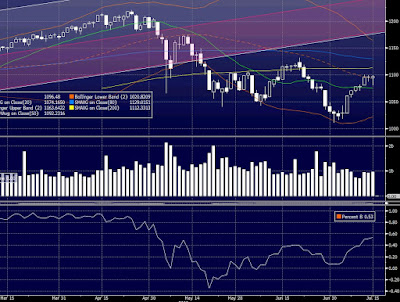 The second chart is the weekly S&p and 20 week MA has not crossed the 50 week MA so looking at the past, this death cross is not a sure thing yet. The market is around 50 week MA, and the previous sell of started from 20 week MA whic is now around 1127.You can see the market has bounced from 80 week MA. 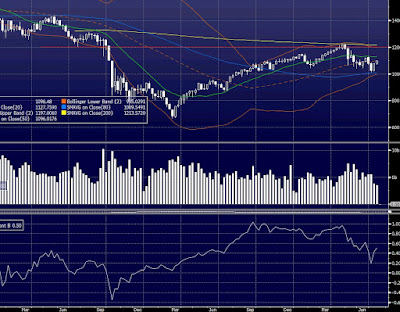 The third chart is the daily Euro/dollar. It looks like the Euro will test 1.30 very soon and if it breaks,it will go all the way up to 1.35-1.36 where 200 day MA sits. I am already short euro which is not that wise considering the cyclic behaviour of the currencies and the the trading range of 1.20-1.60 but I believe fundamentally Euro will have very difficult times in the coming months. 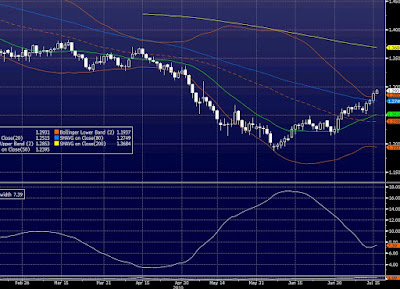 The final chart is the weekly euro/dollar and you can see the big up candle till the 20 week MA. 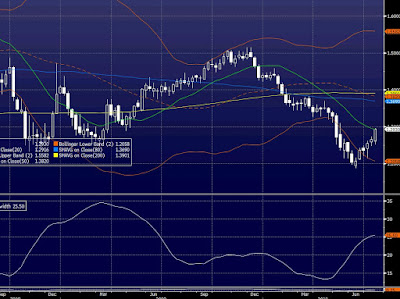 It is a very difficult market,one can get squeezed either side. I understand that the market is not responding to macro economic fundamentals as seriously as it has to YET , but rather the market is supported by the easy liquidty provided by the central banks. One thing for sure, the markets cant run away from fundamental realities for a long time, but you dont want to stand in front of a crazy bull as well.You can try to ride the crazy bull but i will rather sit and watch(if I am not with the bears).
Posted by BHC Fund at 1:25 AM