Sp index fell around 8%from the highs after breaking the post QE3 and previous break out level  around 1420-1430 to the downside.

Below is the sp future daily chart.The market found support around 1340, and put in a reversal candle for the moment.Of course it needs confirmation on the next session to set a potential short term bottom. 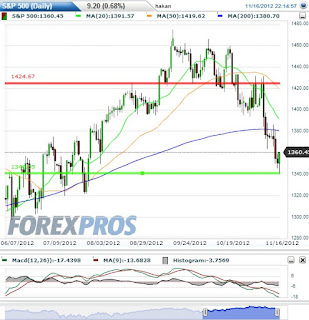 Below is the sp weekly chart.Check the MACD divergence where as the market made a new high, MACD made a lower high , which is a typical sign of exhaustion of the uptrend. 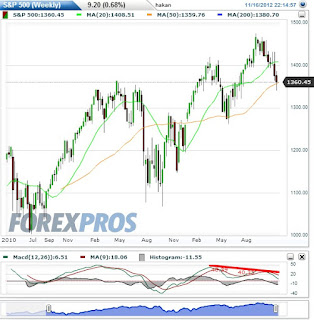 To summarize, it looks like for the very short term, the market is likely to bounce , but for the longer term, the bullish trend had a major blow. Weekly chart is signaling that further weakness in the coming months is more probable than the continuation of the uptrend. With fiscal cliff stories in the headlines, this scenario makes sense.

I bought APPLE around 525 for the short term with the idea of taking advantage from a bounce from key support and oversold conditions.Friday saw the biggest volume in couple of months, which strengthens the probability of a relief rally. 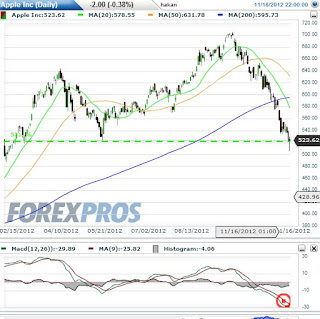 Also long the GOLD .It broke out of the triangle post QE3.  Many analysts point to a cup and handle formation with the recent weakness, which if realizes will take the GOLD above the previous highs. But for that 1800 level has to be taken first. 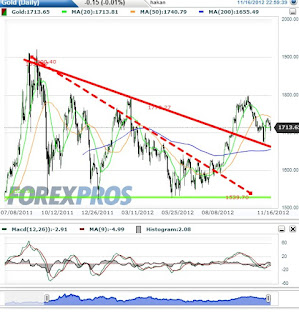 Opened a small short position in the Turkish stock exchange as the market is hovering around all time highs, with impressive around 30% rally from June 12. The market closed on the lows for the week , closing below key 71000 level where the spike up to 73300 happened on the day of a rating hike from Fitch.The latest leg of the rally resulted from the expectations of the rate hike,but the market is struggling to go further up. It looks like to me a good probability trade of the old " buy the rumor sell the news" strategy.Note the MACD divergence here as well. 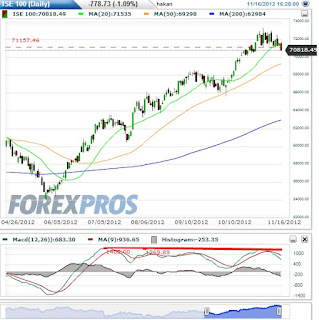